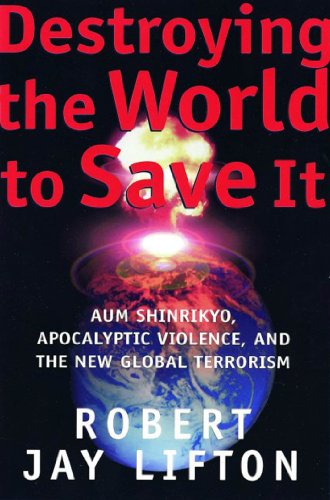 National Book Award winner and renowned psychiatrist Robert Jay Lifton reveals a world at risk from millennial cults intent on ending it all.

Since the earliest moments of recorded history, prophets and gurus have foretold the world's end, but only in the nuclear age has it been possible for a megalomaniac guru with a world-ending vision to bring his prophecy to pass. Now Robert Jay Lifton offers a vivid and disturbing case in point in this chilling exploration of Aum Shinrikyo, the Japanese cult that released sarin nerve gas in the Tokyo subways.

With unprecedented access to former Aum members, Lifton has produced a pathbreaking study of the inner life of a modern millennial cult. He shows how Aum's guru Shoko Asahara (charismatic spiritual leader, con man, madman) created a religion from a global stew of New Age thinking, ancient rituals, and apocalyptic science fiction, then recruited scientists as disciples and set them to producing weapons of mass destruction. Taking stock as well of Charles Manson, Heaven's Gate, and the Oklahoma City bombers, Lifton confronts the frightening possibility of a twenty-first century in which cults and terrorists may be able to bring about their own holocausts.
Bold and compelling, Destroying the World to Save It charts the emergence of a new global threat of urgent concern to us all.