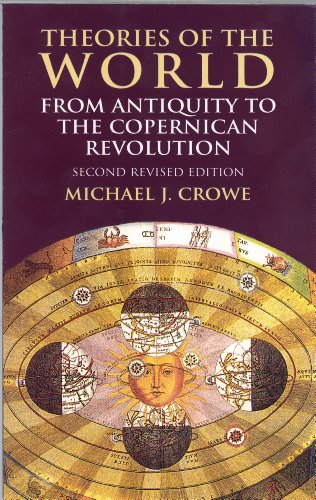 This newly revised edition of Professor Crowe's accessible and enlightening book recreates one of the most dramatic developments in the history of thought: the change from an earth-centered to a sun-centered conception of the solar system. Written in a clear and straightforward manner, the work is organized around a hypothetical debate: Given the evidence available in 1615, which planetary system (Ptolemaic, Copernican, Tychonic, etc.) was most deserving of support?
Beginning with an introductory chapter on celestial motions, Dr. Crowe proceeds to a discussion of Greek astronomy before Ptolemy, mathematical techniques used by ancient astronomers, the Ptolemaic system, the Copernican and Tychonic systems, and the contributions of Kepler and Galileo. In an epilogue, quotes from writers, philosophers, and scientists reveal the impact of Copernican thought on their work. Easily within the reach of anyone with a background in high school mathematics, this absorbing study offers a sound introduction to our solar system and an opportunity to relive one of the most momentous periods in intellectual history.